Summer is underway here on the farm.  Baby lambs were born during the last month as well as a few calves (more on the way).  One ewe gave birth to triplets and one baby boy just wasn’t getting enough.  I wasn’t overly excited to add another chore to my daily list but a bottle it is!  The flip side is he’s adorable and irresistible at feeding time! 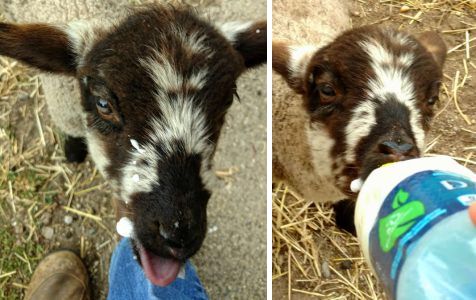 We were able to get our hay mowed, raked and baled last weekend.  Eighty-Eight extra large bales- a great harvest. Oh yeah for next year’s cow food, that’s a “load” off my mind (pun intended).  That being said, it can RAIN NOW!  Everywhere I look it is dry.

Onto Fencing…In the past we’ve used portable fencing but this year we’re making a change.  We’re going to a more permanent style of fence post which means lots driving posts into the ground.  Once it’s up and installed it should eliminate the daily moving of electric netting and make life a little easier.  Yes, for now it’s all about the fencing!

Our spring harvest is over and we’re already putting our fall numbers together.  However, for now, the livestock are eating grass, grass, grass.  It’s starting to dry out and turn brown though. When a lack of rain happens, you start the summer at a deficit and the grass never seems to be able to reach its full potential…or worse, by July everything’s starting to go dry and the pond is starting to look worryingly low. Those are scary times because you don’t know the future, you don’t see an end, and you’re completely at the mercy of the weather.

I have observed through the years that people in agriculture are, generally speaking, people “that believe”.  And it’s because so much is out of our control. The weather, triplet lambs,  the…weather. And the weather! So help us to believe in an average amount of rainfall this summer!

(You can help by giving a bath to the dog, washing your car, and watering your flower garden. “Murphy’s rule!)

Previous From Devastation to Regrowth Next Hot days, cool nights, fairs and mud!